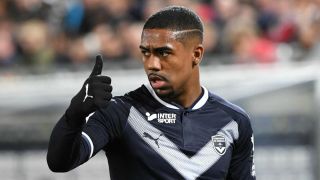 New Barcelona signing Malcom hailed the stature of the LaLiga champions after turning his back on an expected transfer to Roma.

The 21-year-old secured a "dream" €41million move to Camp Nou on Tuesday, just a day after Bordeaux announced they had accepted a bid from Roma.

The Serie A side are now considering their legal options after feeling as though they were forced into an "auction" despite believing negotiations were complete.

Malcom, a Brazil youth international, described his sudden switch to Barca as the fulfilment of a boyhood ambition.

"This is a unique experience. I feel really happy. It's a dream come true to come to one of the biggest clubs in the world," he told Barca TV.

"I hope to make the fans happy. I'm really looking forward to meeting my team-mates, to talk to them and find out more about the way we play.

"I'm really excited and in a hurry to get started. It's difficult to explain the feeling. It's a dream come true since I was young."

The former Corinthians forward sparked a race for his signature with 12 Ligue 1 goals in his final season at Bordeaux.