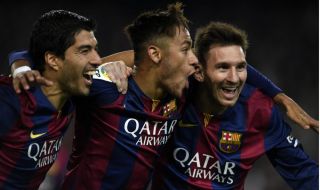 Messi and Neymar finished first and third respectively in last week's Ballon d'Or vote having, along with Suarez, inspired Luis Enrique's team to a haul of five trophies in 2015.

Xavi, who was present for three of those successes before calling time on his illustrious Camp Nou career, believes the coach has impressively developed Barcelona's style from the sublime tiki-taka period under Pep Guardiola – making them equally potent on the counter-attack as they are in possession.

"Luis Enrique has evolved Barcelona," said Xavi, who now plays for Qatari club Al Sadd, in an interview with Marca. "He is serious, very professional.

"Barcelona now also have players capable of playing two ways. When we have the ball, with possession; but now, if you flinch, they go on the counter and this is an option handled perfectly.

"Neymar, Luis Suarez and Messi are amazing. We do not need much preparation – these three are able to create attacks on their own.

"And then there is what lies behind: Busquets, Pique, Alba, Rakitic, Alves… a great team.

"We have the best attack in the world, I think it is the best forward line in history.

"Here, I see everyone in Europe from Bayern Munich to Real Madrid. Today, Barcelona are the best team in the world – a team to enjoy from a distance."

Nevertheless, Xavi feels Barcelona face a battle to retain their Liga title in the face of competition from Atletico Madrid and long-time rival Real Madrid.

"That midfield with Koke, the arrival of [Antoine] Griezmann, the back with [Jan] Oblak, with Juanfran, [Diego] Godin... It's a fantastic team. Simeone has done even better this year."

On Real and Zidane, Xavi added: "I know him and I'm sure he will do well.

"He's been a great of the sport and Madrid will always be in the fight for the title."