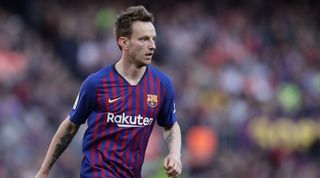 The Camp Nou club brought in Antoine Griezmann and Frenkie de Jong over the summer but failed in their efforts to move on some of their high earners.

The La Liga champions have no intention of making any mid-season signings but will look to trim their squad in January, according to Marca.

Barcelona need to bring in some cash to balance the books, and will look to sell Ivan Rakitic, Samuel Umtiti and Arturo Vidal.

Umtiti and Rakitic have both been linked with moves to the Premier League, in particular Manchester United, in the past.

World Cup-winning defender Umtiti is currently sidelined with a foot injury and is yet to feature for Barça this season.

Rakitic has made three substitute appearances for Ernesto Valverde’s side in all competitions, while Vidal has also featured off the bench three times, scoring in his side's 5-2 win over Real Betis in the second week of the season.

The report adds that no effort will be made to bring in PSG forward Neymar mid-season, despite their aggressive attempts to sign him in August.

Barcelona were eager to bring the Brazilian back to Catalonia two years on from his world record €222 million move to Paris but couldn’t strike a deal with the French champions.

Barça CEO Oscar Grau revealed the extent of the Blaugrana's attempts to re-sign the Brazilian forward this week, admitting: “We made a very big effort for him.

“The club did everything possible with two offers, one with and one without players in exchange but still sustainable.

“The feeling, however, is that PSG never really opened up to a sale.”

Barcelona face Granada in La Liga this weekend after picking up only seven points from their first four matches.