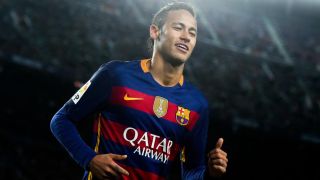 Barcelona vice-president Jordi Mestre does not fear losing Neymar to Real Madrid amid speculation linking the Brazil international with a move to the Santiago Bernabeu.

Madrid allegedly see the 23-year-old as the long-term replacement for Cristiano Ronaldo and recent reports claimed they had met with the former Santos man ahead of the Ballon d'Or gala in Zurich this month.

Neymar's entourage was quick to deny a meeting with Madrid's representatives took place, but that has not stopped speculation about his future.

Mestre, though, is confident the gifted attacker will not leave Camp Nou any time soon.

"I see absolutely no reason why Neymar would want to leave Barcelona," Mestre was quoted as saying by Marca after the attacker scored in his side's 3-1 Copa del Rey quarter-final second-leg win over Athletic Bilbao on Wednesday.

"He is proving to be a great player, a world-class attacker. We are very happy with his performances.

"I don't know whether Florentino Perez watched his game against Athletic, but it is clear that people who like football like a lot of our players.

"For me, Neymar seems very happy here. He has won titles, has made the Ballon d'Or podium ... he looks happy to me and I cannot see why he would want to move."

Neymar has a contract with Barcelona until June 2018, but head coach Luis Enrique this week indicated the club are confident the prized asset will soon sign a new and improved deal.