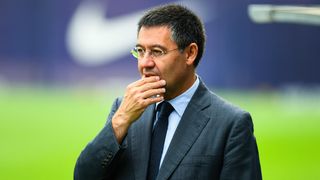 Barcelona president Josep Maria Bartomeu revealed the club would have to discuss the possibility of leaving La Liga if Catalonia gained independence from Spain.

A Catalan independence referendum, which has been deemed illegal, was marred by violence on Sunday.

Bartomeu said Barca's future in La Liga would need to be discussed if Catalonia ever gained independence.

"This situation does not exist so far," he said on Monday.

"But with regards to things that can happen in the future, it is something that the board of directors would discuss. It would be something to analyse calmly.

"If we discuss the subject intensely then obviously we will find the best solution. But if this [independence] happens, the board of directors will see."