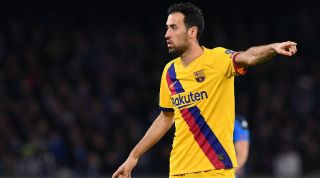 Barcelona drew 1-1 away from home in the first leg of their Champions League round of 16 tie against Napoli.

Dries Mertens gave the home side the lead before Antoine Griezmann equalised for the visitors to take a crucial away goal back to the Camp Nou.

But Barcelona have been left reeling following a string of injuries that are causing concern amongst the players.

Some believe that the squad is not deep enough to cope with an injury crisis as the one Barcelona are experiencing.

Sergio Busquets has voiced his disappointment in the club for not being better prepared.

"[Nelson] Semedo and I were one booking away from a ban so we were always running that risk [of suspension]," Busquets told the media after the Napoli game.

"We hope Pique's injury is nothing serious but we will take on the second leg with what we have. We don't have a deep squad because, unfortunately, that's how it was planned."

Pique faces a late fitness test before it is known whether he will be fit for El Clasico on the weekend.

Barcelona are already without first-teamers Luis Suarez, Ousmane Dembele, Jordi Alba and Sergi Roberto for the match against Real Madrid.

Ivan Rakitic joined Busquets in expressing concerns for the way the club have prepared the squad.

"We have a short squad but those that are in charge knew that," the Croatian midfielder said.

"The solution is what it is. Those that are available will have work really hard because we have an important match in the second leg."

The comments come not long after Lionel Messi's criticism of sporting director Eric Abidal, which almost cost Abidal his job.

On the other hand, Quique Setien remains optimistic about the situation as he tries to downplay the negativity.

"We can win La Liga and the Champions League," the coach said.

"It's true we've lost Busquets and Vidal for the return game but we will recover Alba and Roberto.

"I'm one of those people that looks at things optimistically. We don't have many players, but there's no point complaining about it."