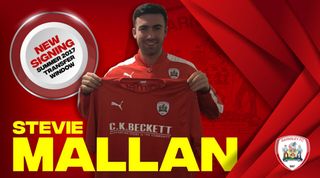 A pretty significant administration error took place in the Barnsley offices as the Championship club accidentally sent their bid for Stevie Mallan to fan forum Black and White Army – but all's well that ended well.

The bid did get through to the Scottish Championship outfit in the end, though, after the website's editor did Barnsley a favour by passing the Tykes' offer on to his beloved club.

There may well have been some further negotiating, but the deal was officially completed on Thursday for a reported fee of £200,000.

Barnsley finished 14th in the Championship last season, and Mallan was a star performer despite St Mirren only narrowly avoiding relegation from the Scottish Championship.