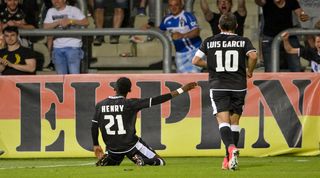 Henry Onyekuru, a 19-year-old who plays for Belgian club K.A.S. Eupen, could be a top-flight player in England next season if a dream move materialises.

The striker – who came close to joining Celtic in January – has scored 18 goals in 35 appearances for the Belgian outfit, who finished the domestic campaign 14th in the league.

Eupen hosted a Europa League play-off match against Royal Excel Mouscron on Wednesday night, winning 2-0 with a fabulous individual effort from Onyekuru to seal victory in the 72nd minute.

Onyekuru dashed with the ball from his own half, then beat four defenders before slotting his strike into the bottom corner off the post. Sign him up?