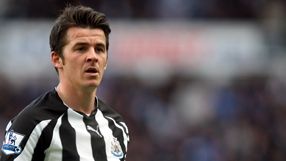 The 28-year-old was charged by the Football Association on Thursday for punching Rovers' Norway midfielder Morten Gamst Pedersen in the chest, which was not seen by the referee.

"I fully accept that I was in the wrong on this occasion and accept the charge that the FA have brought against me," Barton said in a club statement before apologising to all involved.

"This season I have really been enjoying my football and although I have been on the receiving end of a few robust challenges I have, up until now, remained calm in the face of provocation and just carried on with the game.

"But I hold my hands up, I reacted badly to the situation on Wednesday night and I deeply regret it."

Barton was given until Friday to reply to the charge and under the FA's fast-track regulations his admission means he will now be handed a standard three-match ban.

The incident is the latest in a long list of disciplinary problems faced by the former Manchester City player, who joined Newcastle in June 2007. He was jailed in 2008 for assault.

He will now miss the Premier league matches against Fulham, Bolton Wanderers and Chelsea.

Newcastle manager Chris Hughton said: "He has worked so hard on his game this season, but he knows that he can't react the way he did on Wednesday."