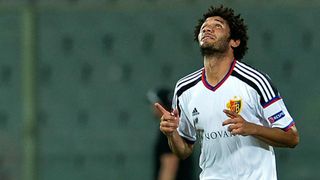 Basel have confirmed Mohamed Elneny is set to leave the club imminently amid strong links with Arsenal.

The Egypt international has reportedly already undergone a medical at the Premier League leaders, with the switch expected to be announced soon.

Arsene Wenger stressed last week that the deal was not done yet, though, with work permit issues thought to be holding up the transfer.

However, it now appears to be a matter of time before the 23-year-old is an Arsenal player after the Swiss champions revealed Elneny sat out Monday's training session ahead of a potential transfer.

"Mohamed Elneny was absent from Monday's training session because he could complete a transfer in the upcoming days," read a statement on Basel's website.

The midfielder started his professional career with El Mokawloon, before joining Basel in January 2013.

He has since gone on to make well over 100 appearances in all competitions for the Swiss champions.