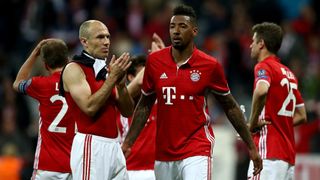 Bayern Munich boss Carlo Ancelotti insists his side are still alive in their Champions League quarter-final despite a 2-1 first-leg defeat to Real Madrid.

A second-half double from Cristiano Ronaldo overturned Arturo Vidal's opener to give the holders an advantage to take back to Santiago Bernabeu.

Vidal missed a penalty late in a first half that Bayern largely controlled but the Bundesliga leaders failed to recover once Javi Martinez had been sent off in between strikes from Ronaldo.

Ancelotti concedes that his old club have the edge but is refusing to accept defeat in Bayern's quest to reach the semi-finals.

"We controlled the match during the first half but we were lacking efficiency," he said. "Also, we were not that lucky.

"Having 10 players of course made it more difficult, but we did okay.

"We are still alive, we are not dead. Real Madrid have better chances now, but we still have a chance, too. And we will play with everything we have."

Manuel Neuer made a number of fine saves to keep his side in the tie, denying Karim Benzema and Ronaldo with particularly strong stops.

There might not have been a clean sheet, but how good was this guy tonight? may just have kept us in this tie April 12, 2017

The Germany number one felt Bayern should have capitalised on their first-half chances but stressed that they believe they can mount a comeback in the Spanish capital.

"We believe we can do it," he told ZDF. "We were the better team in the first half and it could have been two or three-nil."

Captain Philipp Lahm added that Martinez's dismissal - which came as a result of two fouls on Ronaldo in the space of three minutes - was the decisive blow.

"We were in total control during the first half but we did not exploit the spaces well enough," said the full-back. "The red card was the killer."