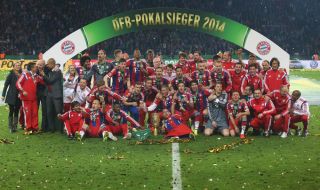 Bayern beat Borussia Dortmund 2-0 after extra-time to lift the trophy for a second year in a row in May courtesy of goals from Arjen Robben and Thomas Muller.

Pep Guardiola's side will be expected to make light work of progressing to the second round when they travel to the Preussen-Stadion this weekend.

Preussen have won just one of their four games in the third tier so far this season, but will be relishing the opportunity to pit their wits against the Bundesliga champions in an eagerly-awaited first-round tie.

It would be no surprise to see Guardiola ring the changes from the 2-0 DFL-Supercup defeat to Dortmund on Wednesday for a clash that comes just five days before the Bavarian giants commence their Bundesliga campaign against Wolfsburg at the Allianz Arena.

Dortmund also face 3. Liga opponents in the form of Stuttgarter Kickers - setting out on their their quest to regain the trophy they won in 2012.

The Kickers have won their first two home matches in the league this season, but Jurgen Klopp's side will be a different proposition altogether at Waldau-Stadion.

Schalke face a trip to Dynamo Dresden, who are joint-top of the table after winning three of their first four 3. Liga games following their relegation last season, in one of four first-round fixtures to be played on Monday.

Bayer Leverkusen face the minnows of Alemannia Waldalgesheim at the fifth-tier side's 3500-capacity Stadion an der Waldstrasse on Friday.

Last season's beaten semi-finalists Wolfsburg travel to Stadion am Bollenfalltor to take on Darmstadt 98, who were on course to make it two wins out of two in the second tier until they were denied by a last-gasp Karl-Heinz Lappe goal which ensured they were held to a 2-2 draw at Ingolstadt on Sunday.

Mainz travel to Chemnitzer in the other game involving a Bundesliga side on Friday, while Duisburg face Nurnberg.

Sunday is an equally busy day of first-round fixtures with newly-promoted Paderborn away at Leipzig, Augsburg making the trip to Magdeburg, and Hoffenheim taking on Paloma.

The round comes to a close on Monday when Hamburg face Energie Cottbus, Union Berlin are at Heidenheim and Kickers Offenbach host Ingolstadt.