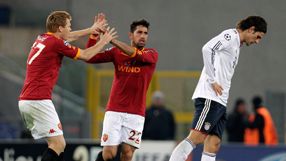 Bayern, who have still qualified top of their group for the last 16 knockout phase with a game to spare, squandered a 2-0 lead in the second half as the hosts clinched an unexpected win.

"A defeat is never a good thing, there is nothing positive there but Bayern can live with this loss," the club's CEO Karl-Heinz Rummenigge told reporters on Wednesday.

"I think it would be good for everyone to treat this defeat softly as we have already advanced as group leaders after five games," he said.

Rummenigge was eager to play down Bayern's first loss in the competition this season after four straight wins, with coach Louis van Gaal under mounting pressure following a poor start to the Bundesliga season.

The Dutchman, while successfully guiding his team through the group stage in Europe, has seen the German champions struggle in the Bundesliga where they are 14 points off the pace in eighth place with just 20 points after 13 matches.

They are already 14 points off leaders Borussia Dortmund.

Van Gaal has been sharply criticised by Bayern boss Uli Hoeness for trying to run the club as a "one-man-show" and their French attacking midfielder Franck Ribery complained on Tuesday of having a lack of connection with the manager.

It was all so different just a few months ago when Van Gaal guided Bayern to the domestic double and the Champions League final in his first season in charge.

"This defeat influences our self-confidence ahead of the league game against Eintracht Frankfurt (in Munich on Saturday)," said Van Gaal whose aim is to earn 10 points from the four league games before the winter break.

"We have to be dominant against Frankfurt, show we have that confidence in our game," he said after calling their implosion after half-time against Roma "unbelievable."

"Of course, it would have been better for that (Saturday's match) if we had won the game in Rome," said Van Gaal, who extended his contract to 2102 in September.