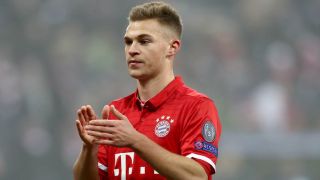 Bayern Munich have dismissed suggestions Joshua Kimmich will leave the club at the end of the 2016-17 campaign.

Stuttgarter Zeitung reported on Tuesday that Kimmich has grown frustrated with his limited opportunities at Bayern and has consequently made the decision to leave in order to get more playing time elsewhere.

However, Bayern chairman Karl-Heinz Rummenigge has made it clear there is no truth in those claims, insisting Kimmich still has a contract at the Allianz Arena until 2020.

"That report is simply false," Rummenigge said in an official statement on the club's website.

"There is no truth in this story.

"Joshua has a contract with Bayern until 2020 and will definitely still play for Bayern next season."

Bayern have also have vowed to take legal action against the publication following their claim that the Germany international will be on the move come June.

Kimmich joined Bayern from Stuttgart in 2015 and has since developed into an important first-team member at the Bundesliga champions.

The 22-year-old midfielder has made 39 appearances in all competitions this term, scoring eight times in the process.