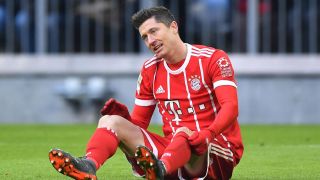 Fresh from scoring five against Besiktas in the Champions League on Tuesday, Bayern drew a blank for the first time since a 3-0 European defeat at Paris Saint-Germain that cost former manager Carlos Ancelotti his job.

Lewandowski - who had tied Jupp Heynckes' record with a goal against Schalke last time out on home turf - had opportunities to continue his streak at the Allianz Arena, only to be thwarted by Hertha goalkeeper Rune Jarstein.

The visitors also defended in stoic fashion as they played the role of party poopers to perfection, in the process recording a third successive clean sheet on their travels.

Despite their failure to secure a club record 15th straight victory, Bayern still extended their lead at the summit to 20 points, albeit nearest rivals Borussia Dortmund can cut into that gap when they host Augsburg on Monday.

When the teams had met in Berlin last October, Bayern surrendered a two-goal lead to draw 2-2 in their first outing following the departure of Ancelotti.

Heynckes wasn't in charge on that occasion, but the veteran coach has engineered such a stunning turnaround in the club's on-field fortunes that it's now a case of when, rather than if, Bayern secure a record-breaking sixth successive Bundesliga title.

The 72-year-old – who missed the home win over Schalke on February 10 due to illness – recalled Franck Ribery and Arjen Robben as he shuffled his pack, though all eyes were firmly focused on Lewandowski's record attempt.

The Poland international twice went close to creating history before the interval, with Jarstein keeping out a close-range header before then combining with defender Jordan Torunarigha to snuff out a one-on-one opportunity set up by Thomas Muller's first-time throughball.

Home matches of Robert Lewandowski for this season:February 24, 2018

Torunarigha was also in the right place to hack clear when Mats Hummels inadvertently deflected Javi Martinez's driven cross towards the goal, while Ribery carelessly blasted over as Bayern endured a frustrating first 45 minutes.

Jarstein continued to deny Lewandowski after the break, anticipating well to grasp hold of a curling attempt on one of the few occasions the forward had escaped the attentions of the impressive Torunarigha.

David Alaba also saw a curling free-kick from 20 yards out turned away in acrobatic fashion as Bayern's frustrations grew with each passing minute the game remained scoreless.

Heynckes sent on Kingsley Coman, Sandro Wagner and Arturo Vidal in an attempt to find a breakthrough, though when the first of the three substitutes quickly picked up an injury, Bayern were effectively reduced to 10 men for the remainder of the contest.

Still, Robben saw a set-piece strike kept out by Jarstein during stoppage time as Hertha held firm through to the final whistle, bringing to an end Bayern's winning run.