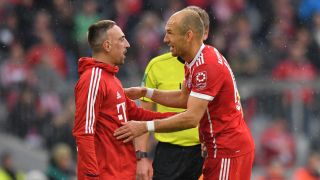 The duo will be out of contract at the end of the campaign, with Robben, who turns 34 in January, stating last month that retirement could be an option for him.

Ribery, meanwhile, has expressed a desire to keep playing for up to three more years and to retire at Bayern, though he would likely have to be content with a squad role should he remain at the Allianz Arena.

The Frenchman has won seven Bundesliga titles – one more than Robben – and both were key members of the 2012-13 treble-winning side, and Rummenigge was keen to emphasise their importance to the Bavarian giants.

"Franck and Arjen both have a big history here and we know what we have with them. Both are very important for us," the chairman told TZ.

"But it is important how they will continue. We definitely won't decide that in near future but there will be serious talks. Let's say in early spring."

It looks likely that Robben and Ribery will have more competition to contend with should that stay at Bayern next season, with Serge Gnabry set to form part of the squad next year after his loan to Hoffenheim finishes.

"It is not planned that Serge Gnabry will stay at Hoffenheim. We plan to bring him back after this season and then integrate him," said Rummenigge.

"Despite the injury he had we are very satisfied with his performances so far. We especially remember his two goals against [RB] Leipzig."