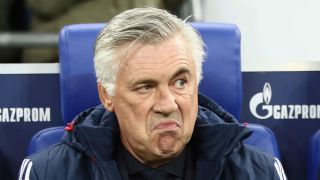 Carlo Ancelotti has been sacked as head coach of Bayern Munich following an underwhelming start to the season that culminated in Wednesday's 3-0 Champions League thrashing at Paris Saint-Germain.

Ancelotti had won the Bundesliga title in his first campaign in Germany, but results and performances have tailed off - amid reports former club AC Milan are interested in the Italian - and the Bayern board acted on Thursday.

Bayern are third in the league and second in their Champions League group, with dismal defeats to Hoffenheim and PSG exacerbated by further poor displays and apparent problems behind the scenes.

Ancelotti's assistant and former Bayern defender Willy Sagnol will take charge in the interim, though Hoffenheim coach Julian Nagelsmann has been long touted as a target by Allianz Arena chiefs.

1 - Yesterday’s defeat against Paris (0-3) was Carlo Ancelotti’s heaviest with Bayern Munchen in all competitions. Fatal. September 28, 2017

Bayern CEO Karl-Heinz Rummenigge said in a statement: "The performance of our team since the start of the season did not meet the expectations we put to them.

"The game in Paris clearly showed that we had to take action.

"Hasan Salihamidzic [sporting director] and I gave Carlo an open and serious discussion today and informed him of our decision.

"I would like to thank Carlo for his co-operation and regret that we have had to take this decision.

"Carlo is my friend and will remain so, but we had to make a professional decision in the best interests of FC Bayern. I now expect the team to have a positive development and improve performance, so we can reach our goals for this season."

Three-time Champions League-winning coach Ancelotti was hired to replace Pep Guardiola as Bayern sought greater rewards in Europe than the three semi-final appearances made under the Catalan.

However, Bayern were eliminated by Ancelotti's former club Real Madrid in last season's quarter-finals, going down 6-3 on aggregate.

A semi-final defeat in the DFB-Pokal left Ancelotti facing questions, having presided over the club's most underwhelming campaign since wrestling control of the Bundesliga away from Borussia Dortmund in 2012.

However, the current campaign has been equally shoddy, with Ancelotti having to fend off rumours that he had a January departure to the Chinese Super League lined up, amid muddled team selection and poor performances, including blowing a two-goal lead at home to Wolfsburg to draw 2-2.

Thomas Muller had earlier taken issue with being dropped from the team, while Arjen Robben, Franck Ribery and Mats Hummels were benched for the fateful defeat at the Parc des Princes.

Asked if the team were still behind Ancelotti after the loss, Robben told reporters: "I will not answer that. It was a painful defeat, we can talk about this. When it is a game as big as this, you never want to lose."

Ancelotti's departure marks a rocky start to the campaign at the club, with Manuel Neuer out until January with a foot injury, after which the Italian was forced to defend his fitness coach Giovani Mauri.

Star striker Robert Lewandowski has also taken aim at the club's refusal to splash the cash in the transfer market, after Bayern turned down the chance to enter a bidding war for want-away Arsenal star Alexis Sanchez.

Sagnol was reportedly drafted in to the club in order to add Bayern experience to Ancelotti's Italian-daubed backroom team and his audition for the role will begin at Hertha Berlin on Sunday.

After retiring as a player at Bayern in 2009, Sagnol managed France Under-21s before landing the top job at Bordeaux, although he lasted under two years and was dismissed with the club 14th in Ligue 1.