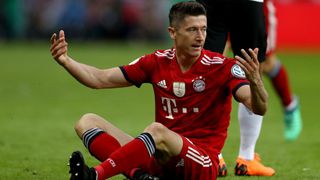 Bayern Munich will not sell Robert Lewandowski, even if a bid of €150million is made, according to chairman Karl-Heinz Rummenigge.

Head coach Niko Kovac admitted this week that the striker is considering the prospect of leaving the club after four successful years at the Allianz Arena.

Real Madrid have been linked with the 29-year-old for some time, while Maurizio Sarri has reportedly identified him as a top Chelsea target during the final nine days of the Premier League's transfer window.

However, Rummenigge insists there is no amount of money that could be offered that will make Bayern change their stance on the Poland international, who has three years left on his contract.

"With Robert, we clearly want to send a signal to people within and outside the club: Bayern Munich are completely different to other clubs who get weak when certain sums come along," he told TZ.

"We want to show that our door remains closed. We are completely satisfied with him, and, in his position, there are only a few players who are comparable.

"We have no interest in selling him and it does not matter if somebody offers 100 or 150million. The top quality we have stays with us."

Lewandowski has won four Bundesliga titles, two DFL-Supercups and the DFB-Pokal since joining Bayern from Borussia Dortmund in 2014.

He has finished as top goalscorer in Germany's top flight in three of the last five seasons, including 2017-18, in which he scored 29 league goals.