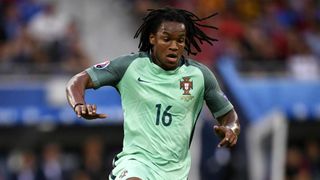 Bayern Munich chairman Karl-Heinz Rummenigge believes the Bundesliga champions would not have been able to afford Renato Sanches had they waited until after Euro 2016.

The Bavarians announced the capture of the Portugal international in May, paying Benfica an initial fee of €35million for the young midfielder.

Sanches then impressed at Euro 2016 as he played a key role in Portugal's successful finals, winning young player of the tournament, and Rummenigge thinks his price would have gone through the roof had a deal not been in place beforehand.

"Was I surprised by Renato Sanches' performances at Euro 2016? Yes and no," Rummenigge told Soester Anzeiger.

"It's extraordinary when someone plays at the Euros like he did at the tender age of 18. I was nowhere near that level at the age of 18. But then again, he does seem to have extraordinary talents.

"We are happy that we made the decision to sign him quite early, after the Champions League quarter-final tie against Benfica. And we are very happy that we had the courage to spend big on him in April because €35million is a lot of money.

"Bayern would not have been able to afford him had we tried to sign him after the Euros. We would be talking about crazy money now. And he would definitely not be playing in the Bundesliga next term then."