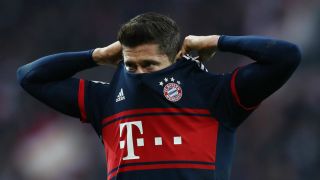 Madrid have been linked with the prolific 29-year-old to refresh an attack that has struggled this season, with central striker Karim Benzema only scoring two LaLiga goals in an injury-affected campaign.

Lewandowski hit 30 in each of the last two Bundesliga campaigns but previously complained about a lack of striking support at the Allianz Arena.

Bayern moved for Hoffenheim's Germany international Sandro Wagner in the January transfer window to alleviate the burden on Lewandowski, who has scored 25 times in all competitions this term.

Claims Madrid have put the Poland international - along with Inter captain Mauro Icardi - on their shortlist for the end of the season have continued, but he rejected suggestions he is set to leave Bavaria.

"I know this situation very well, I hear this speculation every year," Lewandowski told reporters on Thursday.

"These rumours do not interest me and I have nothing more to say.

"I have no idea, I did not hear that they [agent Cezary Kucharski and Madrid] were talking. I think that's another speculation."

Lewandowski was on target as Bayern beat Paderborn 6-0 to move into the DFB-Pokal semi-finals on Tuesday, with their next match coming at home to Schalke in the Bundesliga on Saturday.