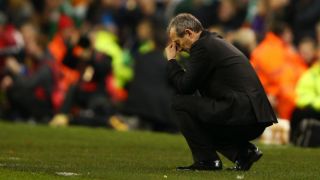 Mehmed Bazdarevic was left dejected by Bosnia-Herzegovina's Euro 2016 play-off defeat after a controversial penalty decision helped Republic of Ireland to a 2-0 win.

Jon Walters scored twice to wrap up a 3-1 aggregate triumph for the hosts in Dublin, his first coming from the penalty spot after Daryl Murphy's cross brushed the hand of defender Ervin Zukanovic inside the box.

Bazdarevic criticised the performance of referee Bjoirn Kuipers, but refused to discuss the spot-kick call.

"I won't speak about that, but it would have consequences," the 55-year-old said. "But I would like to say the referee did not do his job properly in this game."

He added: "First of all it's very hard to speak about this. We know what we lost. The team that beat us played very well and had more chances.

"We played as well as we could, and we tried to match the Irish players in an aggressive game. We did our best. I'm very disappointed about the game. I feel sorry for the fans.

Bosnia, who finished third in Group B behind Belgium and Wales, have never qualified for a European Championship.