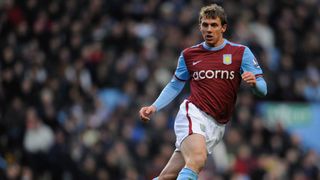 Stephen Warnock is eager to make up for lost time and produce an FA Cup upset when Derby County take on Manchester United in the fourth round on Friday.

Despite being named in England’s squad for the 2010 World Cup, the 34-year-old left-back’s career came to a stuttering halt six months later when then Aston Villa manager Gerard Houllier deemed him unworthy of a first-team place.

Warnock has been unable to reproduce the form that enabled him to win two international caps but feels he has the opportunity to rebuild his reputation with a shock win in the cup.

"I had a difficult time at Villa when Gerard Houllier came in," the former Liverpool defender said.

"I thought I was playing well at the time, but all of a sudden I was left out of the squad and things took a bit of a slump.

"Sometimes you get ­scapegoated as a troublemaker, or something like that, but I thought it was harsh.

"Nobody ever gave me an explanation or a reason for it, and that was the toughest part. Every time I went in to try and ask about it, he didn’t want to have the conversation.

"If it was because some of us were on too much money, it would have been nice to be told that. But it was never mentioned to me and in the end I jumped ship to Leeds to rebuild my career.

"Villa and Derby could possibly trade places at the end of this season, but it would be incredibly sad if Villa ended up in the ­Championship because it’s a massive club."

Pride Park Stadium plays host for the fourth-round tie against 11-time tournament winners United, and Warnock believes the Championship side can pull off the unexpected.

"We look at it as a good time to play United because they have been in a bad spell – but they will look at Derby and think the same way," he added.

"To be honest, I don’t take any pleasure from seeing United struggle.

"Although I grew up in Liverpool, and it’s one of those situations you’d love to have seen as a kid, when you ­understand how hard it is to get out of it, you realise how they must be feeling."