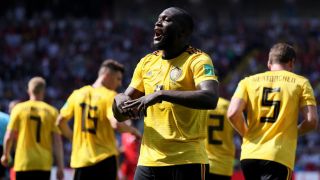 Romelu Lukaku and Eden Hazard both scored braces as Belgium crushed Tunisia 5-2 to all but secure their place in the World Cup knockout stages.

The Red Devils just need England to avoid defeat to Panama in Sunday's other Group G game to confirm their last-16 spot and no team at Russia 2018 will want to be drawn against Roberto Martinez's side after this swashbuckling display.

Belgium were dominant from the outset, taking a 2-0 lead inside 16 minutes through Hazard's penalty and Lukaku's fine finish.

Dylan Bronn then handed the African side an unlikely lifeline before Lukaku - who scored twice in the opening 3-0 win over Panama - restored Belgium's lead to become his country's all-time top scorer at major tournaments with seven goals.

Hazard netted his second early in the second half, while substitute Michy Batshuayi – who had earlier missed three golden opportunities – scored a fifth in the 90th minute. Wahbi Khazri bagged a late consolation for Tunisia, but it did little to take the shine off a memorable result for Belgium.

Should England overcome Panama then only top spot in the group will be at stake when Belgium face Gareth Southgate's side on Thursday, while Tunisia will be eliminated should the result of Sunday's game be anything other than an unlikely Panama win.

Belgium, who named the same starting XI that cruised past Panama in their opening game, got off to a great start after six minutes thanks to some clumsy defending from Syam Ben Youssef.

The full-back's late challenge on Hazard was deemed, with the use of VAR, to have been just inside the area and the Chelsea man stepped up to crack the resulting spot-kick into the bottom-left corner.

Hazard failed to turn home Lukaku's low cross from close-range soon after but the latter doubled the Red Devils' advantage after 16 minutes.

Dries Mertens won possession just inside the Tunisia half before driving forward and feeding Lukaku. The Manchester United striker then arrowed a low strike across Farouk Ben Mustapha into the bottom-right corner for his third goal of the tournament.

Any thoughts that the rampant Belgians would accelerate out of sight were dispelled - at least briefly - just two minutes later, though.

Khazri's inswinging free-kick from the left was met by Bronn, who flashed a header past Thibaut Courtois entirely against the run of play.

That goal served to halt Belgium's early dominance, but they did grab a third with almost the last kick of the half.

The impressive Thomas Meunier found Lukaku inside the area and the in-form striker clipped a delightful finish over the onrushing Mustapha.

Any faint hopes that Tunisia had of clawing their way back into the game were extinguished six minutes into the second half when Hazard scored his second.

Toby Alderweireld's long pass from defence was taken on the chest by Hazard, who then rounded Mustapha to stroke into an empty net.

With the game essentially wrapped up, Martinez opted to bring Lukaku off before the hour, the striker having picked up a knock on his foot earlier in the game.

Yannick Carrasco came close to adding a fifth goal when his whipped effort from outside the area fizzed agonisingly past the post, while Batshuayi saw an effort cleared off the line by Yassine Meriah after he had rounded the goalkeeper.

Batshuayi looked like he would endure a miserable afternoon after two more missed opportunities – one crashing back off the crossbar from close-range – but the Chelsea man finally scored late on, meeting Youri Tielemans' fine cross at the back post with a controlled half-volley.

Khazri scored a consolation deep into stoppage time after a neat swivel in the box, but it mattered little as Belgium comfortably took a giant stride towards the last 16.

- Belgium have won each of their last six World Cup group-stage matches, winning their last one in 2002, all three in 2014 and their opening two of this tournament.
- Tunisia are now winless in 13 World Cup matches (D4 L9), losing their last four in a row.
- Lukaku has scored 17 goals in his last 11 matches for Belgium, failing to score in just one of those matches (against Portugal earlier this month).
- Belgium have won 11 of their 12 competitive matches under Roberto Martinez (D1), scoring 51 goals and conceding just eight.