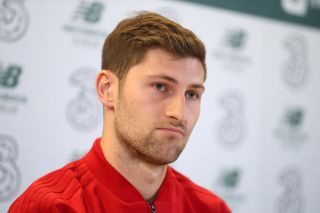 Ben Davies believes Wales can book a spot at Euro 2020 next summer because they are a “proper team” again.

The Euro 2016 semi-finalists have had an up-and-down qualifying campaign, featuring wins over Slovakia and Azerbaijan and defeats to Croatia and Hungary.

Wales’ destiny is out of their hands heading into the final two games next month, but Davies feels Ryan Giggs’ side can qualify after encouraging 1-1 draws against Slovakia and Croatia.

“We’ll take a lot from them, it’s probably two of our best performances,” Davies said after Wales had held the World Cup finalists in Cardiff.

“We looked really solid, we looked like a proper team out there – the boys performed.

“We’ve been hard to beat and that’s where we want to get to.

“We have been brave in the past and played out from the back a lot.

“But sometimes you just need to slow it down, get organised and get back to what we are good at. I think the last two games have really shown that.”

Wales conclude their campaign with a trip to Azerbaijan on November 16 and a home clash with Hungary three days later.

Two wins will see Wales secure a top-two qualifying place, as long as Slovakia do not win both of their remaining games.

Slovakia finish away to Group E leaders Croatia – who need a point to guarantee qualification – and at home to bottom-placed Azerbaijan.

“We know exactly what we’ve got to do, and that’s win our games,” said Davies, who won his 50th cap against Croatia and set up Gareth Bale for Wales’ equaliser.

“Nothing more than that really. But this week has been good for our confidence going into two massive games at the end of the group.

“I think it was important we didn’t lose the Croatia game.

“It keeps the group competitive and keeps them on their toes against Slovakia.

“Hopefully we can do our job, but there are no mugs in this group.

“Azerbaijan are a better side than people give them credit for. It will be a tough place to go.”

Davies now returns to club football and a Tottenham squad desperate to get their season back on track.

Spurs suffered sobering 7-2 and 3-0 defeats to Bayern Munich and Brighton before the international break and are at home to the Premier League’s bottom club Watford on Saturday.

“It will be nice to get back there now. It’s time to get results,” Davies said.

“But for us it’s about putting the performances in on the pitch. If we do that for Spurs, then hopefully we can kick on and get on a good run.”