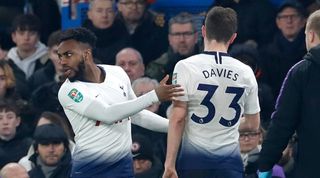 The Wales international joined the Premier League side from Swansea in July 2014 and currently has two years remaining on his deal.

He will officially extend his stay with Spurs until 2024 by the end of the month, according to the Telegraph.

The club are in advanced talks with the 26-year-old over the terms of the new contract, which will be confirmed in the next few weeks.

Davies’ extension casts further doubt over the future of Danny Rose and Spurs are understood to be ready to listen to offers for the England left-back.

Tottenham broke their club record transfer with the £55 million capture of Lyon midfielder Tanguy Ndombele last week and also secured the signing of Leeds youngster Jack Clarke, who has been sent back on loan to Elland Road.