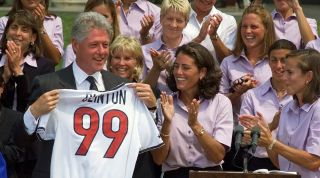 It’s easy to lead the pack for a very long time when you have a massive head start. Women’s football in the United States is a study in just what a head start can mean, both competitively and in terms of popularity.

America’s history with the sport may be relatively short when compared with the rest of the football-loving world, but part of that short history is a fairly gender-neutral adoption of it. In other words, it wasn’t just the boys who took to the game Americans called “soccer”.

Because of that, American teams dominated the early days of FIFA’s expansion into the women’s game. The first Women’s World Cup (though FIFA chose not to call it that, at least not officially) was held in 1991.

The United States won that tournament, then repeated the feat eight years later at the 1999 World Cup they hosted. On that day in Pasadena, California, more than 90,000 spectators and nearly 18 million TV viewers watched as Brandi Chastain converted the winning penalty against China, then ripped off her shirt in celebration. The image of Chastain in her sports bra, overcome by the joy of the moment, is now iconic.

1999 was certainly the pinnacle of female football’s popularity in the United States. That tournament, and the team that won it, captured the imaginations of a public long adjusted to the notion of women playing the game in a country that was still largely cut off from the rest of the football world.

After the failure of the US men at the 1998 World Cup in France, and primed by the US Women’s National Team’s gold medal on home soil at the 1996 Olympics, Americans were happy to root for a winner. Maybe the country still had a long way to go to compete with the traditional footballing powers in the men’s version of the sport, but in the women’s version, America produced champions.

To better understand how things even got to that moment in 1999, it’s necessary to go all the way back to 1972. That was the year a piece of landmark legislation entered into law which required any educational institution that received federal money to ensure both men and women had equal opportunity to participate in activities under the school’s banner. Simply put, it meant colleges and universities across the country were required to provide for women’s sports. Through the '70s and into the '80s, female participation in sports skyrocketed as schools inaugurated new programmes across a large spectrum.

Title IX’s impact on football specifically was colossal. With scholarships now on offer, thousands of players continued playing football into their university years. Many of them turned professional just as FIFA introduced the Women’s World Cup, and the international game began to rise in prominence.

America’s advantage, at least for the first decade of high-level competition, lied with the number of well-coached players who didn't lack competitive environments in which to hone their talents before taking on the world. While so many other nations dragged their feet on promoting women’s football, the United States exploded, fully formed, onto the stage.

Of course, Title IX might not have helped the United States produce so many good players if it weren’t for another phenomenon of the '70s and '80s: the youth soccer boom. As suburban areas expanded, parents became more and more attracted to a simple game that helped bored, rambunctious kids burn off excess energy.

Girls, rather than be excluded because football was a 'man’s game', signed up in large numbers; because the sport lacked the cultural importance it had abroad, no one bothered to suggest they shouldn’t.

The short-lived popularity of the NASL pushed the boom, and the host of foreigners it attracted to American shores created a cottage industry around the youth game. That structure outlasted the NASL and delivered the pool of players upon which the success of both US national teams would rest, with the women finding themselves atop the competitive heap thanks to the aforementioned slow advancement of the game almost everywhere else.

Despite the huge crowds that turned out for the Women’s World Cup in 1999, and the massive audiences that tuned in on TV, the women’s game has never been able to turn that popularity into success at club level. The country is now on its third attempt at a professional women’s league, the NWSL, after the WUSA (2001-03) and WPS (2009-11) folded after three seasons. For whatever reasons, Americans - perhaps more attuned to the big event, over a shorter period of time - haven’t transitioned their appreciation for women’s football over from the international game.

But the health of women’s domestic soccer, if not perfect, is on an upward trend. The NWSL seems to have learned from the mistakes of its predecessors and partnerships with Major League Soccer clubs are providing an infrastructure those failed leagues never had.

The league is by no means a big time concern, and sexist attitudes over the value of women’s sports versus those played by men still pervade. But there have been improvements – the minimum salary has more than doubled since 2015, from $6,842 to $16,538 – and though the number is still painfully low, there is a legitimate feeling that the club game is on something approaching solid footing. There’s a long way to go, but it helps that so many stars of the U.S. women’s national team ply their trade for teams in the competition – all of them in fact, just like four years ago.

But the lead provided by that head start – created by one bit of language in a piece of legislation passed 47 years ago – and the spread of soccer across suburbia around the same time, is effectively gone.

Germany, Brazil, Japan, England and a host of others have caught up, although the US did win the last World Cup in Canada with a 5-2 trouncing of Japan – their first since that glorious southern California day in 1999.

What remains true, however, is that the women’s game still garners a level of respect in America that makes it unique among football cultures of the world. Next is the hard part: turning that unique position back into an advantage that ensures the future of a women’s football league and beyond.