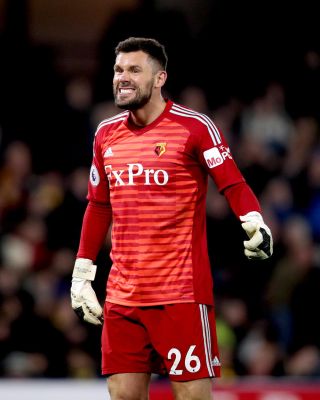 Watford goalkeeper Ben Foster claims it is only a matter of time before Manchester City smash 10 goals past a team.

The Hornets felt the full force of the champions’ attacking power on Saturday as they were thrashed 8-0 at the Etihad Stadium in the Premier League.

It came just four months after City overpowered Watford 6-0 in the FA Cup final, while Pep Guardiola’s men have also registered a 9-0 and two 7-0s in knockout action in 2019.

“They will do it to somebody,” Foster said. “There will be a nine or 10 out there soon.

“As a goalie, coming here in the first place it’s almost an achievement to keep it at one or two goals. At times, if they’re on it, they are incredible.

“They were scary at times. It was just relentless. You could see them opening us up and the chances developing in front of your eyes. It was absolutely no fun. In all honesty, it could have been double digits.”

Watford, who remain at the foot of the table with just two points, have become City’s favourite whipping boys. The Hornets have now lost their last 12 games against City, conceding 46 goals in the process.

The tone for their latest drubbing was set after just 52 seconds as David Silva opened the scoring – the first of five City goals inside the opening 18 minutes.

“We are just doing our job,” said Fernandinho, who was untested in a defensive role forced on him by injuries to team-mates.

“It was a good result and the performance, the way we played, five in the first half – all good.

“But if two you look at the second half, we had the same intensity. This is the best way to build a very good team, to fight for titles, the best way to play every game.”

City’s ruthless performance – in which they had 28 attempts on goal and also hit the woodwork twice – was the perfect response to last week’s defeat at Norwich and underlined a determination not to surrender their title lightly.

“Liverpool know that for sure – they know it,” said Fernandinho.

The Brazilian also does not doubt City are capable of scoring 10 goals but he insists simply winning games is the main aim.

The 34-year-old said: “We know in football everything can happen. Sometimes we play so good and make a very good performance but don’t score any goals, now we’ve scored a lot of goals.

“We just try to play our football. After what happened against Norwich there had to be a response for the fans.

“The best way to play football is to try to win. It doesn’t matter how many goals you score but now, when we are playing, the most important thing is three points.”