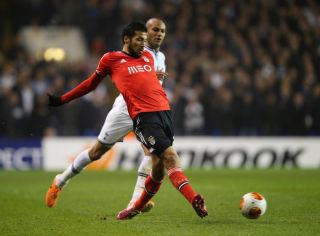 The Argentina defender has long since been linked with a move away from the newly crowned Primeira Liga champions, who he joined from Real Madrid in 2011.

Premier League side Manchester United are among the teams said to be interested in the 27-year-old's services as a result of his impressive campaign.

Benfica secured a 33rd Portuguese title with a 2-0 win over Olhanense, but Garay gave no assurances over his future with the Lisbon outfit after the game.

"I don't know, we'll see," Garay told A Bola when asked if he will stay at Benfica.

"My wife and I are very happy here and I hope to stay more years."

Garay has made 37 appearances for Benfica this season, scoring seven goals.

Benfica are on track for a quadruple this season ahead of their UEFA Europa semi-final first leg against Juventus his week, while a final-four showdown against Porto in the Taca da Liga and a Taca de Portugal final with Rio Ave are also on the horizon.