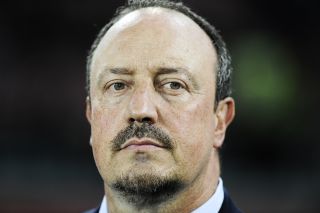 But the Italian club's head coach, Benitez did not seem too fazed when he offered a summary of all three opponents on Friday.

"As I've already said, our group in Champions League is balanced. We can do well but Dortmund, Arsenal and Olympique de Marseille are very strong teams too," Benitez said.

"We all know Dortmund, they reached the final last season, we know how they play, they're a top team.

"It will be tough against them too, the transfer market is still on for them and it seems they're still negotiating.

"Marseille is a team with a great and very warm support and they're at the top of the table in France.

"They're all tough opponents, but we will be tough for them too, we have confidence in our team."

Napoli sit top of Serie A after one round, following their 3-0 victory over Bologna last week.

Benitez and Napoli's next hurdle will be Chievo, who the Neapolitans will visit on Saturday and the 53-year-old Spaniard expects a tough challenge from the Verona-based club.

"Yes, I analysed Chievo and I think they're a tough opponent to beat," Benitez said.

"They work well from the tactical point of view, they're strong in defence and in counter-attack too. They play well and I'm sure it will be a tough match."