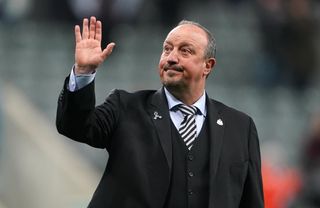 Rafael Benitez has told Jurgen Klopp he still has some way to go to beat his Champions League heroics.

The Spaniard marvelled at Liverpool’s stunning 4-0 semi-final second-leg victory over Barcelona on Tuesday night, and Tottenham’s remarkable fightback against Ajax 24 hours later, as they set up an all-English showdown in Madrid next month.

However, after seeing a television poll rate the Reds’ remarkable fightback in the 2005 final in Istanbul to beat AC Milan on penalties as the more amazing comeback, Benitez, who was in charge at Anfield at the time, could not argue with the verdict.

Asked which was better, the 59-year-old replied with a smile: “It’s very clear no, in the poll?

“Come on, no chance. You have 45 minutes, 3-0 against AC Milan, the best team, miles away from anyone, the fans singing at half-time, the Milan fans so happy, and then you go and you score three goals in six minutes and (Jerzy) Dudek’s save, and then you go to extra time, you go to the penalties?

“Better than that? Come on. I am telling you, a Turkish friend of mine that was here said, ‘Listen, for one year, we were analysing this game’.

“Now, you play a very good game. One thing is the comeback and the atmosphere, the emotions: no chance, that is Istanbul. The other thing, is it a great performance, a great game? Yes, fine, that is good.”

Benitez was delighted to see the Reds and Spurs progress, and their Premier League counterparts Arsenal and Chelsea make it to the Europa League final in Baku.

He cited their success as further evidence of the strength of English football’s top flight, which draws to a conclusion on Sunday when his Newcastle side travel to face relegated Fulham.

He said: “If it is every year, maybe it is a bad thing. If it is just one year, maybe not. I am sure the teams from the other countries will compete to be there next year.”

Newcastle, if not necessarily Benitez – further talks over a contract extension are planned for next week – will compete in the Premier League once again next season having secured their place once again with a strong finish, to the delight of their manager.

He said: “Last year we had 44 points and finished 10th; this year, 10th has 50 points already. That means this season has been more difficult.

“It was a great achievement. It could have been better, but if you analyse the potential of all the teams, I think we did great.”