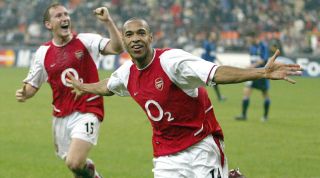 Bobby Robson’s Newcastle were flying high in the Premier League but had struggled to mix it with Europe's best, losing their first three group games to Dynamo Kiev, Feyenoord and Juventus without even scoring.

But the Magpies didn't give up. Against a Juve side including Edgar Davids and Alessandro Del Piero at St James’ Park, one moment was enough for Newcastle to kick-start their campaign.

Andy Griffin rushed onto a quickly taken free-kick and skipped past a challenge, before seeing his cross-cum-shot inadvertently turned home by Gianluigi Buffon. Robson's men managed to pull off victories over Dynamo Kiev and Feyenoord, coming from behind in Ukraine before storming through against the latter via Craig Bellamy's last-minute winner. With that, they became the first side to lose their first three games and qualify for the knockouts.

Despite becoming the ‘Invincibles’ in the Premier League, the Gunners were far from impenetrable in Europe that season, losing two of their first three group games – including a 3-0 hiding from Inter at Highbury.

But after Ashley Cole snatched a crucial 88th-minute winner in their fourth game against Dynamo Kiev, Arsenal went on to annihilate Inter 5-1 at San Siro in arguably their most formidable European display, led by the brilliance of two-goal Thierry Henry.

Arsene Wenger’s men managed to hold their nerve and clinched a 2-0 home win over Lokomotiv Moscow to progress on 10 points as group winners, demonstrating the steely character that proved the bedrock of that great Gunners side.

Qualifying alongside Arsenal in second place were the Russians, who had defied the odds to oust Inter Milan and Dynamo Kiev. After amassing just a single point from their first two fixtures – a goalless home draw against Arsenal – Lokomotiv were rock bottom of Group B, exactly where most people thought they'd stay.

But they were determined to leave with more than just pride. The capital outfit took four points off Inter, including a 3-0 hammering of the Italian giants at home, and claimed a 3-2 win over Dynamo Kiev in the penultimate game to finish above Inter and hang on for a place in the last 16.

Nobody fancied then-UEFA Cup champions Porto going into the Champions League that year, but a young Jose Mourinho was determined to announce himself in style. But before he sprinted down the touchline at Old Trafford, the Portuguese prince masterminded a great escape in Group F.

After a 3-1 home defeat to Real Madrid left them on one point from two games, Porto stormed through the final four with 10 points from a possible 12. They collected wins over Didier Drogba's Marseille and then Partizan Belgrade, before drawing with Madrid at home. The Portuguese giant climbed out of the group unscathed before kick-starting their stunning tilt at European domination.

After losing their penultimate fixture to Monaco 1-0, Liverpool needed to beat Olympiakos by two clear goals to qualify. But Rafa Benitez’s men didn't make things easy for themselves, and went behind to a Rivaldo free-kick midway through the first half.

It teed up one of football's most dramatic comebacks. The Reds netted within two minutes of the restart via Florent Sinama-Pongolle, before Neil Mellor made things interesting in the 81st minute. Then, in the dying embers, Gerrard pounced on Mellor’s cushioned header before drilling a superb volley into the corner from 25 yards to send Liverpool through and Sky's Andy Gray potty.

After collecting just four points from five games, Bremen were in need of a minor miracle going into their final game against Panathinaikos. Level on points with the Greeks and needing victory themselves, Barcelona to beat Udinese and a four-goal swing overturning, the odds were stacked firmly against Thomas Schaaf's side.

But the Bundesliga club produced a thrilling finale to their group stage adventure by smashing Panathinaikos 5-1. It looked as though their five-star display would be in vain, though, until their Catalan friends produced a late show of their own, scoring twice in the last five minutes to knock Udinese out. Cruel.

Despite being the fifth-lowest-ranked team in the competition that year, Olympiakos managed to survive a group that also contained Real Madrid, Werder Bremen and Lazio. Takis Lemonis’s men were unanimously predicted to finish rock bottom but played out of their skins to become the season’s surprise package.

Claiming a double over Werder Bremen and goalless draw against Madrid at the Karaiskakis Stadium, the Greeks stormed through to qualify behind the Spaniards – five points clear of Bremen.

Finding themselves in another dire situation, the 2005 champions needed to summon their powers of recovery once again to scrape through the group stage, after collecting just one point from three games against Marseille, Porto and Besiktas.

Thankfully for the Reds they eventually got going, smashing a record-breaking eight goals past Besiktas at Anfield before thumping Porto 4-1. Level with the Portuguese side going into the final match, Liverpool faced the unenviable task of becoming the first English side to win at the Stade Velodrome in Marseille – but a convincing and clinical performance gave them a memorable 4-0 victory and passage through to the knockout phase.

The German heavyweights had been less-than-impressive in Europe after winning just four points from as many games, including back-to-back defeats against Bordeaux. Louis van Gaal's job was under intense scrutiny, and the Dutchman needed big results fast. Four points behind Juventus in third place, Bayern had to win their final two games while hoping other results went their way.

Yet incredibly they managed both, after a 1-0 home win over Maccabi Haifa and 4-1 crushing of Juve in Turin left them with 10 points and qualification ahead of the Bianconeri. With spirits high after their unlikely escape, Bayern went all the way to the final before losing out to Jose Mourinho’s Inter at the final hurdle.

RECOMMENDED Van Gaal at Bayern: When Louis averted a crisis – then talked himself into a bitter exit

Neil Lennon’s men forged a reputation for punching above their weight in Europe, and their excellent display of courage and resilience in this campaign showed exactly why. After a decent start, with four points from their first three matches, Lennon's men hosted Barcelona at Celtic Park after losing 2-1 in the Camp Nou.

Despite seeing just 16.4% of the ball, the Scots went ahead through Victor Wanyama before sealing victory late via youngster Tony Watt. Lionel Messi's injury-time effort was a mere consolation; Celtic won with the lowest recorded possession figure since Opta began collecting the data in 2006/07.

The Bhoys lost at Benfica in their penultimate game, leaving them third on goal difference, but grafted to a 2-1 win over Lokomotiv Moscow in their final match thanks to Kris Commons' 81st-minute spot-kick.

Having fallen at the group stage in two of their three Champions League campaigns to date, there was an ominous sense of history repeating itself in 2014 after Manchester City failed to win any of their first four group games, including a particularly galling defeat at home to CSKA Moscow. Bottom of the group and two points behind CSKA and Roma, they still had Pep Guardiola's Bayern Munich to come again.

When they trailed the German giants 2-1 at home with five minutes left, City fans could have been forgiven for resigning themselves to another season of failure. But Sergio Aguero, and all that. Having netted City's first goal from the spot, the brilliant Argentine equalised on 85 minutes and then capitalised on a rare blunder from former Citizen Jerome Boateng to poke in a dramatic 91st-minute winner.

Roma and CSKA's draw that same night still had the Italians ahead of City on goal difference going into their final game in Rome. There, after a nervy hour, Samir Nasri and Pablo Zabaleta both struck in a 2-0 win to see Manuel Pellegrini's men safely through. Phew.

Group F should have been straightforward for Arsenal: sure, they had Bayern Munich for company, but Dinamo Zagreb and Olympiakos should have made for comfortable cannon fodder and safe progression to the knockouts.

Not so. After the Gunners were humbled 2-1 in Zagreb – the Croatians' first Champions League win since September 1999 – they were beaten 3-2 at Olympiakos despite twice coming from behind. A shock 2-0 win over Bayern at the Emirates Stadium looked to have got things back on track, but Arsene Wenger's side were thrashed 5-1 in the reverse fixture.

After four games they had three points; the same as Dinamo Zagreb, and six fewer than Olympiakos with only two games to go. But then came the fightback: Arsenal whipped Dinamo Zagreb 3-0 on Matchday Five while Bayern stuck four past Olympiakos, setting up a do-or-die final game against the Greek side in Piraeus. But they needn't have worried: Olivier Giroud's hat-trick sealed a memorable win and safe passage to a last-16 tonking from Barcelona.