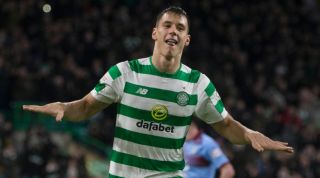 Filip Benkovic believes his loan spell at Celtic has put him in a good position to challenge for game time with Leicester City in the Premier League next season.

The 21-year-old joined the Scottish champions on a one-year loan deal on transfer deadline day last summer, and established himself as a regular under Brendan Rodgers before suffering an ankle injury last month.

Benkovic believes that the game time he has received in Scotland and during the Bhoys’ Europa League campaign has prepared him to take the “next step” by breaking into the Foxes' first team next season.

“Here, I’ve played a lot of high-level games, which has helped me a lot,” Benkovic told Croatian outlet Sportske Novosti.

“But I think I have plenty of room for progress. I need to work, to improve, to play in every part of the game, I just have to continue this kind of rhythm with strong work in training.

“It's important to respect the coaches and team-mates and be honest in training and with everyone around you.

“It's a formula for growth, a recipe for further progress. I think I'm on the right track.

“I just have to believe in myself, and I definitely believe. I have never lacked self-confidence.

“I want to make another step at the end of the season. I want to show that I can play in the English Premier League.

“But I want to emphasise that I still have to make progress. I can still do a lot of work on my game to be an even more complete player, I just need to work.