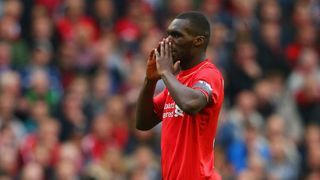 Christian Benteke claims he still has to fight for his place at Liverpool, despite revealing manager Jurgen Klopp is a confirmed admirer.

The Belgian striker was a transfer target for Klopp during the manager's spell with Borussia Dortmund following his debut campaign in the Premier League.

A deal never materialised in 2013 but the pair have been united at Anfield following Brendan Rodgers' sacking.

Despite the previous interest, Benteke – who has four goals in nine league appearances this term – claims it does not affect his position.

"It was after my first year at Aston Villa," the 24-year-old explained.

"My agent and the manager had a meeting about maybe doing a transfer but nothing happened. But it doesn't matter that he tried to sign me before. Liverpool are a massive club and you have to fight for your place. It isn't easy."

Benteke believes the mood among the players has changed following Klopp's arrival and says he is enjoying working under the German coach.

"He is our friend but he is not our best friend. That is the best way to put it, I think," he said.

"He is there for us if we need him. We have to do what he wants us to do. The atmosphere has changed because we all know what he did at his previous club. Everyone wants to impress him."

Liverpool travel to the Etihad Stadium to play table-toppers Manchester City on Saturday.