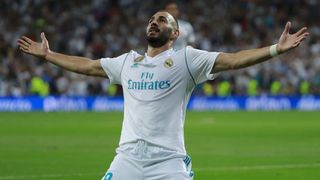 Benzema made a super cameo appearance as reigning LaLiga champions Madrid accounted for Eibar 3-0 at the Santiago Bernabeu on Sunday.

The France international – who has only scored once in LaLiga this season – came off the bench and provided an outstanding assist for Marcelo's goal and Madrid's third in the 82nd minute.

And countryman Zidane heaped praise on Benzema after the 29-year-old was criticised following his miss against Tottenham in the Champions League during the week.

"I'm happy because at the end of the day that's what we like: players who know how to play and link up," Zidane said.

"He didn't score, but he started the move around the halfway line. It was a nice move for anyone who likes football.

"They're never going to stop arguing about him. He's very good and that's that. He showed his quality in the half an hour he got today.

"For me he's not overrated. Everyone can say it but I enjoy seeing Karim out on the pitch. I don't agree with those who think that he's overrated. He is an important player in this team.

The best photos of the night as we made it four LaLiga wins in a row!October 22, 2017

Benzema replaced Marco Asensio just past the hour-mark in the Spanish capital after the young midfielder dazzled against Eibar.

Asensio had not scored since August but the Spain international doubled Madrid's lead approaching the half-hour mark, having delivered the cross that Paulo Oliveira turned into his own net in the 18th minute.

Zidane, whose Madrid are five points adrift of leaders Barcelona, said: "He got a goal and was heavily involved right from the off and was creating chances.

"After the way he started the season, it seems as if he's had two weeks in which he wasn't performing to the same standard. There's no reason to be worried and it's perfectly normal."