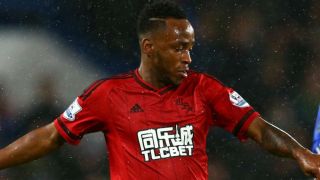 Saido Berahino's future is in the hands of West Brom chairman Jeremy Peace, according to Tony Pulis.

Berahino threatened to go on strike in September after West Brom rejected a deadline-day approach from Tottenham.

That situation was quickly resolved but Berahino has endured a difficult campaign - scoring three goals in just eight Premier League starts - and has been heavily linked with a move away from The Hawthorns in the January transfer window.

Tottenham have again been credited with an interest as have Stoke City, Chelsea and Leicester City. However, it is Newcastle United that appear to have emerged as the favourites to sign him.

The Tyneside club are reportedly willing to pay £18million to land Berahino and, speaking after West Brom's 1-0 win over Bristol City in Tuesday's FA Cup third round replay, Pulis said: "The valuation will be determined by the chairman.

"As much as it's the player, it's the financial deal and like I say, we'll leave it with Jeremy to sort it."

Berahino did not feature at Ashton Gate but Pulis insisted his absence was due to illness rather than because of an impending transfer.

"If he hadn't been ill, he'd have been playing," Pulis said. "He's not been well, he's picked up a bug the same as Lambert and a few of the other lads over the past few weeks.

"We want to keep Saido if we can."