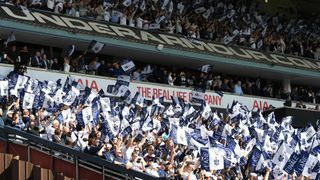 Spurs will move to Wembley from next season as they rebuild their home stadium and marked the end of their current ground by welcoming former stars to the game among a host of other events.

The match itself saw Victor Wanyama and Harry Kane score as Tottenham fans waved specially designed flags as part of the day's festivities around the venue, which later saw fans invade the pitch.

Take a look at how Spurs and others marked the occasion before, during and after the game in our Twitter moment, below.