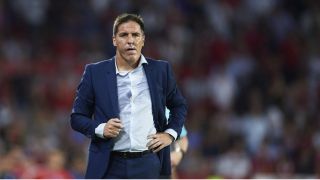 Sevilla coach Eduardo Berizzo is already plotting "revenge" after he saw his team annihilated 5-1 by Spartak Moscow in the Champions League on Tuesday.

The Spanish side were the better team for most of the first hour and should have gone 2-1 up early in the second half, as they wasted several chances.

Wissam Ben Yedder was particularly culpable, as he failed to score from 10 yards and smashed his effort at a defender on the line instead of showing the composure to pick out the bottom-left corner.

Spartak then took over, as Lorenzo Melgarejo, Denis Glushakov, Luiz Adriano and Quincy Promes laid on goals to add to the Dutchman's opener, consigning Sevilla to a brutal defeat.

And Berizzo is already eager for the Russians' trip to the Ramon Sanchez Pizjuan on November 1.

"Every defensive error was penalised with goals," Berizzo told beIN Sports. "They were very effective.

"But until the move for the second goal, the game was ours. We had taken the control as we wanted. The defeat is too heavy and was too much of a punishment.

"At 2-1 we fell apart, we messed up tying the game and let in more goals.

"That defeat causes the need for a reaction. We have to analyse things and realise that we have to do more of everything, first me and then the team.

"We must turn everything negative that we feel today around. Football puts us in the situation for revenge. We will play the same team in Seville and we must beat them."

By contrast, Spartak coach Massimo Carrera was understandably elated and championed what he thought to be the "perfect" performance.

Speaking to reporters after the game, the Italian said: "It was a difficult match, as we were lucky in the second half, like when [Dmitri] Kombarov saved a goal on the goal line.

"But the team played a perfect game and gave very few options to a great team."