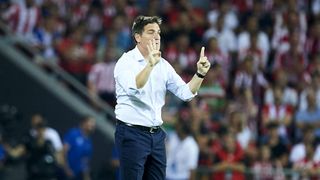 Athletic Bilbao have sacked Eduardo Berizzo after presiding over just a single win in his 14 LaLiga games at the helm.

Berizzo was given a one-year deal by the Basque club in May, replacing Jose Angel Ziganda, but things have not gone to plan for the Argentinian coach.

Athletic played 14 league games with Berizzo in charge, but have not won since the opening day of the campaign against Leganes and sit third from bottom, three points adrift of safety.

Along with Real Madrid and Barcelona, Athletic are one of just three clubs to have never been relegated from LaLiga, but they face a real struggle in ensuring that historic run continues beyond the current campaign.

Athletic Club has decided to terminate the contract that united its coach Eduardo Berizzo with the entity.From tomorrow, Wednesday December 5th, Gaizka Garitano will be responsible for managing the first team of Athletic Club. Mila esker Eduardo, zorte on! December 4, 2018

Among their most damaging result this term was the 3-1 home defeat to bitter local rivals Real Sociedad at the start of October.

Monday's 3-0 loss at Levante proved the final straw, with Berizzo being relieved of his duties for the second time in under a year, after he was sacked by Sevilla last December.