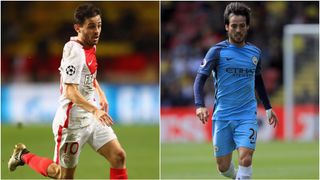 Bernardo Silva says he cannot wait to learn from David Silva after joining his superstar namesake at Manchester City from Monaco.

The 22-year-old completed his move, reportedly worth £43million, on Friday as City waste little time starting their transfer business for 2017-18.

He becomes the second Silva in Pep Guardiola's squad and, as well as sharing the same name, has had his style likened to the Spain playmaker and could be his long-term successor.

Bernardo Silva described his new team-mate one of the world's top players and is eager to pick up as much as he can from the 31-year-old.

"David Silva is one of the best players in the world," the Portugal international told City's website after sealing his transfer.

"I look forward to learning from him and to see what he can teach me.

"To have this opportunity is fantastic. I look forward to playing with him.

"When I was a kid I was looking at him and some other players, now to have the chance to play with them is great."

Very happy to have now signed for !I hope to make all the fans proud and together win many many titlesMay 26, 2017

Bernardo Silva leaves Monaco after helping Leonardo Jardim's men to their first Ligue 1 title since 2000, a decision he concedes was a tough one to make.

"Playing for Monaco has been a great experience," he said.

"I was a little bit surprised by how quickly I adapted to French football. We had a lot of Portuguese players and a Portuguese coach that helped me a lot as well.

"Of course, it will be a little difficult to leave Monaco. It is true that in Monaco this season we did some fantastic things.

"To win a title against PSG is not easy in France, to arrive in the semi-finals of the Champions League was fantastic.

"But this summer will be a good time to leave. We are champions and it was good to be part of Monaco. I am very grateful for everything but now I am looking forward to being part this new project in my life."

Monaco beat City in the Champions League last-16 this season and Bernardo Silva relished the experience of playing at the Etihad Stadium, despite his side losing that thrilling first-leg clash 5-3.

He said: "We were not pleased about the score because we didn't win that game, but it was a great match with two teams that wanted to play football and score goals.

"In the end, I think both teams played a fantastic game. To play here at the Etihad was special."