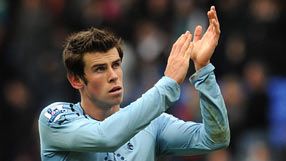 The 21-year-old wonderkid has been in scintillating form for Spurs in the Champions League this season, leading to a string of top European clubs casting envious glances in the direction of White Hart Lane.

After bagging a superb hat-trick in Tottenham's 4-3 defeat to Inter Milan at the San Siro last month, Bale then went on to destroy the same opposition in North London last week, inspiring Spurs to a memorable 3-1 win.

And Bettega has claimed that his former employers were in talks with Spurs boss Harry Redknapp over Bale, insisting that he travelled to London last year with the Welshman high on his list of priorities.

"Last year I went to London to talk with Redknapp and I asked him about Gareth Bale," Bettega told Italia Uno.

"I knew Tottenham were interested in some of Juventus' players. And the speech wasn't closed.

"When there was the handover to [Juventus general managers, Beppe] Marotta and [Fabio] Paratici I told them all my movements.

"I don't know if they have resumed negotiations with Tottenham."

Juventus ignored Bettega’s recommendation and chose to swoop for CSKA Moscow winger Milos Krasic instead, a decision which is still bound to haunt officials in Turin to this day.

But with the Welshman receiving all the plaudits for a rapid rise to fame this year, Redknapp is aware of the battle that lies ahead to keep the wolves away from his door.

"If someone comes in and offers something crazy, you never know do you?" Redknapp told Sky Sports News.

"But he is certainly not a player we want to sell. We are looking to build a team and he is a massive part of that.

"Nothing would turn his head because he is such a level-headed, down-to-earth kid. It wouldn't change him at all."