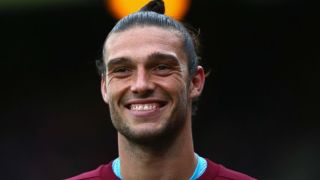 West Ham manager Slaven Bilic has reiterated to potential suitors that fit-again Andy Carroll is not for sale.

The bustling striker, who has netted in his last two outings, has been linked with a return to former club Newcastle United and Sunderland in recent days.

But Bilic insists Carroll is going nowhere as the Upton Park club hope their record signing's injury woes – the England international has made just 30 Premier League starts since joining permanently from Liverpool in May 2013 following a loan spell - are behind him.

"We never said we were willing to sell Andy, not me, not the chairman. He's a very popular player," said Bilic when he faced the media on Thursday ahead of West Ham's FA Cup tie against Wolves this weekend.

"Two goals in two games, the rumours start. The only way to stop the rumours is to play badly.

"We do not want to sell him. I think he likes it here, he's very important in the dressing room. I know he is happy here."

Bilic has hinted that a quiet transfer window is likely, as he added: "We did the majority of the work in the transfer market in the summer, we are in a good situation with players coming back."