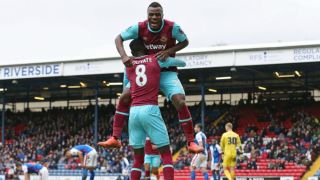 Emmanuel Emenike scored his first goals for West Ham as they came from behind to beat Blackburn Rovers 5-1 in the FA Cup fifth round on Sunday.

Blackburn had failed to beat West Ham in their last 11 meetings but an upset looked as though it could be on the cards when Ben Marshall steered in from outside the area to give them the lead.

Slaven Bilic's side battled past Liverpool across two games in the previous round and drew on that resilience again to turn the game on its head, with Victor Moses' shot evading Jason Steele's grasp before Dimitri Payet's fine free-kick made it 2-1.

Chris Taylor was sent off for a second bookable offence early in the second half to leave Paul Lambert's side facing a mountain to climb to reach the quarter-finals, and Emenike struck just past the hour mark to put the visitors firmly in control.

Cheikhou Kouyate was given a straight red card for bringing down Adam Henley as he raced through on goal, but Emenike and Payet each doubled their tallies late on to secure safe progress for the visitors into the last eight.

The blustery conditions at Ewood Park made for a scrappy affair in the opening quarter of an hour, with Moses' deflected shot and Hope Akpan's wayward header the only half-chances of note.

But Marshall opened the scoring with the first moment of real quality in the match, turning into space 20 yards from goal before placing a low shot through the crowded penalty area and beyond the reach of Darren Randolph in the 20th minute.

West Ham drew level six minutes later, as Moses was given time and space to carry the ball to the edge of the box, and his low shot bobbled through the grasp of Steele and into the far corner.

And Bilic's side took the lead nine minutes before the break, Payet's brilliantly flighted free-kick from just outside the area leaving Steele with no chance.

Blackburn came out fighting in the second half, with Marshall testing Randolph from 25 yards out before Darragh Lenihan came close, but the home side's hopes of a comeback were dealt a severe blow when Taylor was issued a second yellow card for tripping Moses.

Kouyate thought he had made it 3-1 when he tapped in at the far post after Steele denied Michail Antonio superbly, only for the offside flag to spare Blackburn - thought it proved a short-lived reprieve.

Steele denied Antonio again from close range but, after the ball escaped Moses and broke to Kouyate, the midfielder rolled it across the box to give Emenike the chance to tap the ball in unmarked.

Kouyate was dismissed with a quarter of an hour to play after he tripped Henley as he tried to race into the box, but West Ham surged further ahead when Emenike latched onto Payet's long ball, danced around Steele and tucked the ball confidently home.

Emenike almost completed his hat-trick but he could only rattle the outside of the post from close range, but Payet capped the victory with the goal of the game, as he skipped clear on the halfway line before surging to the edge of the area and slotting low past Steele in the dying seconds.