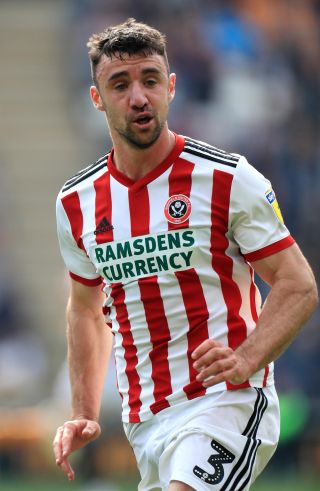 Sheffield United defender Enda Stevens regrets his side will not be launching their first season back in the Premier League with an opening-day fixture at Bramall Lane.

The Blades, who ended their 12-year top-flight exile by pipping Leeds to the Sky Bet Championship’s second automatic promotion place last month, will play at Bournemouth on the opening weekend of the 2019-20 campaign on August 10.

Chris Wilder’s side then face back-to-back home games against Crystal Palace and Leicester before completing their August league fixtures with a trip to Europa League winners Chelsea.

“I just wanted a home game really to experience Bramall Lane again, the feelgood factor and to get that back,” Stevens said.

“It’s something you miss when you stop playing and to be honest I didn’t want the season to finish, it was that enjoyable towards the end.

“That’s the one thing I’m really looking forward to, getting back at Bramall Lane.”

Stevens does not expect the Blades to make too many changes to their expansive brand of football under Wilder, which has seen them promoted twice in three seasons.

“I just feel we’re going to go out and enjoy it,” the Republic of Ireland left-back said.

“When you get there you’ll see the occasion you’re going to be playing in and the nerves might kick in.

“But the manager and the staff, they take all that away from you. In the Championship they took all the pressure off us and said just go out and play the way you play.

“They were confident that if we did that we’d get to where we wanted to be, and we did, and I think we’re going to have the same mentality in the Premier League.”

The Blades, promoted alongside Norwich and play-off winners Aston Villa, face a daunting fixture schedule at the turn of the year.

After a home game against Watford on Boxing Day, they play at Manchester City and then at Liverpool on New Year’s Day, while a trip to Arsenal and the reverse fixture against the Premier League champions also await them in January.

“People have been sending me screenshots of the end of December to January and we’re just laughing about it,” Stevens said.

“We’re going to be ready for the first game of the season and just fight for survival really.”

Stevens, whose partner gave birth to their baby daughter, Bella Elaine, last month, is ready for a break after playing the full 90 minutes in both of the Republic’s recent Euro 2020 qualifiers against Denmark and Gibraltar.

“I’ll just clear my head now for about 10 days,” he added. “I’ll just forget all about football and start to slowly tick over to get ready for pre-season.”