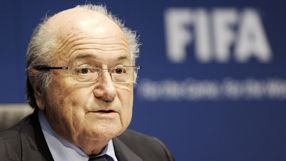 Blatter said sporting authorities would make the decision and questioned whether either Sao Paulo or Rio de Janeiro, Brazil's two biggest cities, would be ready for the Confederations Cup in 2013, regarded as a dress-rehearsal for the following year.

"We do not have stadium ready, neither in Sao Paulo, nor in Rio de Janeiro and perhaps they will not be ready for the Confederations Cup in 2013.

"So let us wait and see, but the decision on the... stadium is a sporting decision and not a political decision."

Last Friday, Brazilian politicians, including President Dilma Rousseff, threw their weight behind the country's financial capital Sao Paulo for the honour of staging the opening match, even though work has yet to start on its planned stadium.

Gilberto Kassab, the mayor of Sao Paulo, said the city would "without question" stage the opening match and the sports minister Orlando Silva said Rousseff shared that view.

On being asked about Blatter's comments, a spokesman for Kassab told Reuters: "The decision is actually up to FIFA but Sao Paulo is making the best possible effort to host the opening match."

The Sao Paulo venue is the biggest of many headaches facing the 2014 World Cup hosts where initial worries about crumbling infrastructure and rampant crime have been exacerbated by delays in the building or reconstruction of stadiums.

Sao Paulo initially planned to use the Morumbi stadium until the arena was barred by FIFA and local organizers over a lack of financial guarantees for the necessary rebuilding.

The new stadium will be built by Corinthians, one of Brazil's biggest and most popular clubs. But they plan to build the stadium with a capacity of 48,000, while FIFA require a minimum of 65,000 for the opening match.

Negotiations are taking place over who will pay for the building of the extra 17,000 seats.

There are also legal concerns over the site on which the stadium will be built, with reports suggesting that planning permission will not be a straightforward issue.

In Rio de Janeiro, a spokesman for the Brazilian Football Confederation (CBF) said FIFA had expressed concern about the country's airports during the meeting in Zurich.

"The Brazilian government is aware and taking action. Today, it would be a problem, but from what the government tells us, it will be resolved in the short term.

"We showed the situation with regards to each of the 12 stadiums," he added. "Even though you can't see any tractors, the situation is under control and on time."