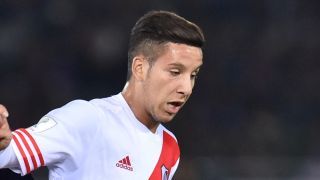 River Plate kept their Primera Division titles alive and dented those of leaders Boca Juniors with a 3-1 Superclasico victory at La Bombonera.

Victory would have sent Boca six points clear of San Lorenzo at the summit and left River 10 adrift, but Marcelo Gallardo's surged up to third with an impressive victory.

Gonzalo Martinez opened the scoring and set up Lucas Alario for the second, but Fernando Gago's fluke free-kick gave Guillermo Barros Schelotto's side hope on the stroke of half-time.

Boca dominated the second period but were unable to take their chances, and Sebastian Driuissi clinched the win by finishing a swift break with his 15th league goal of the season.

River took the lead when Martinez rifled a sensational volley inside Agustin Rossi's near post in the 15th minute.

Martinez made the most of a poor clearance from Santiago Vergini to feed Alario, whose shot Rossi was unable to keep out.

At the end of a woeful first half for Boca, Gago provided them with a lifeline in the third minute of stoppage time when his free-kick delivery from in excess of 35 yards sailed over an indecisive Augusto Batalla to reduce the deficit.

Boca dominated after the restart and Dario Benedetto rounded Batalla only to see his shot - which looked to be heading wide - cleared on the line by Lucas Martinez Quarta.

An impressive double-save from Batalla kept out Walter Bou and Gino Peruzzi in the 89th minute, and River punished Boca when Driussi drilled into the bottom-left after a swift break, removing his shirt to celebrate in sheer elation.