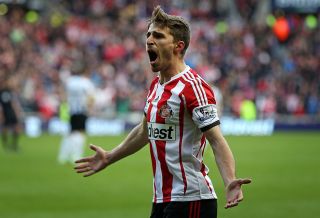 The 22-year-old - who joined Brendan Rodgers’ side from Roma in July 2012 - was sent out to Sunderland for the season in a bid to gain first-team football.

Borini endured a frustrating first term at Anfield as a series of injuries limited him to 20 appearances in all competitions.

And the switch is already paying off for the Italian, with the striker stealing the show as Gus Poyet's men registered their first league win of the season in a 2-1 victory over bitter rivals Newcastle on Sunday.

The deciding goal for Borini in the 84th minute was his first in Sunderland colours, and though he claiming it felt "fantastic" a return to Liverpool is what he really wants.

"I remain a Liverpool player," he told radio station Rete Sport. "I'm on loan because there wasn't space for me and, after a year of injuries, I needed to get my confidence back, to play some games.

"But my roots are still there. There has been a squad revolution there, but the worst thing for me was getting injured when I was actually playing at the start of last season."

The striker will now hope to continue to impress during his loan spell, with Sunderland looking to build on momentum from their win when they face Hull City on Saturday.