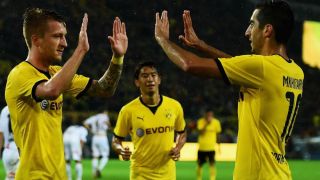 Marco Reus led a rampant Borussia Dortmund into the UEFA Europa League group stage with a comprehensive 7-2 victory over Odd on Thursday.

The Germany international struck a hat-trick for Thomas Tuchel's men as they raced through the play-off round with an 11-5 aggregate triumph over the Norwegian side.

Having opened up a 3-0 lead in last week's first leg, only to lose 4-3, Odd again momentarily stunned their illustrious opponents as Ole Halvorsen levelled the tie with the game's opening goal, but it only served to stir Dortmund - who were 4-1 ahead by half-time.

Henrikh Mkhitaryan's eighth goal of the season got them level, before two from Reus and a fourth from Shinji Kagawa put Dortmund in complete control.

The goals continued to come after the restart as Ilkay Gundogan opened his account for the season, before Reus was on hand to score his third after 57 minutes.

Oliver Berg grabbed a consolation for Odd just after the hour, but it was Dortmund celebrating at the final whistle - after Kagawa had scored again - as they booked their place in Friday's group-stage draw.

Dortmund fans may have felt worryingly familiar as the hosts' early attempts to put the tie out of Odd's reach found goalkeeper Sondre Rossbach in fine form, and those heroics were subsequently rewarded as the unmarked Halvorsen stooped low to head Thomas Grogaard's corner past Roman Weidenfeller.

But Dortmund were behind on the night for just six minutes as Mkhitaryan levelled with a stunning 20-yard strike across Rossbach, having cut in from the left flank.

The relentless pace from Dortmund continued and a minute later they were ahead, Gundogan jinking away from two men before finding Reus, who swept the ball home.

As Dortmund kicked into top gear, Reus was again on hand to convert from close range, after a perfect cross from Mkhitaryan.

Kagawa added a fourth as the Odd defence struggled to live with Dortmund's slick passing and if Odd thought the break might slow Dortmund down, they were wrong.

Just five minutes after the restart, Gundogan's powerful drive was too hot to handle for Rossbach, who could only parry the 20-yard effort into the net.

Reus ghosted in at the back post to complete his hat-trick on the end of another inviting cross from the industrious Mkhitaryan, but the visitors gave themselves something to cheer as Berg grabbed their fifth goal of the tie after a neat lay-off from Halvorsen.

But a defensive error allowed substitute Pierre-Emerick Aubameyang to give Kagawa a tap-in to bring up a madcap final scoreline, which could have even been added to before the full-time whistle, had Mats Hummels' header dipped under the crossbar rather than flick the top of it.