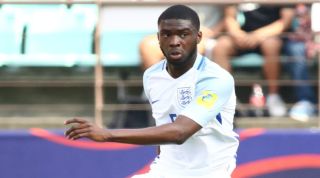 England got off to a blistering start in the U20 World Cup in South Korea after comfortably dispatching Argentina 3-0 in their opening match.

But their second group A match against Guinea on Tuesday didn't go so well.

Paul Simpson's side took the lead through Bournemouth midfielder Lewis Cook with a long-range strike in the 53rd minute, but shot themselves in the foot just five minutes later.

Chelsea's young defender Tomori, who spent part of last season on loan at Brighton in the Championship, attempted to pass the ball back from just inside the England half to goalkeeper Dean Henderson, under little pressure.

But the effort was way too powerful, and Manchester United shot-stopper Henderson – standing on the edge of his box – was unable to prevent it rolling into the empty net.

The match finished 1-1, giving Guinea their first ever point in the competition's history. England face hosts South Korea in their final group game on Friday.