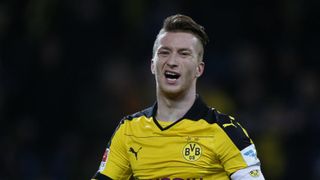 Marco Reus is determined to keep Borussia Dortmund's Bundesliga title chances alive when they take on Ingolstadt on Saturday.

Thomas Tuchel's men sit second in the table heading into this weekend's encounter, trailing leaders Bayern Munich by eight points, and face a tough task to catch the reigning champions in the remainder of the season.

Reus refuses to throw in the towel, though, and aims to keep fighting right until the very end.

"If you don't always have a target, you are in the wrong line of work. You want to achieve something, play well, win titles and be important to the team," Reus told the official Bundesliga website.

"Looking at the bigger picture, we have had a decent season so far. We scored a lot of goals and played a lot of good games. It wasn't easy with a new coach and a new philosophy. We wondered how much time we would need, but right from the start we have been putting in some great performances.

"Catching Bayern is going to be tough. They are too consistent. We have improved on last season, but not enough just yet. But in the end it is all about the points you have at the end of the season. Then we will see where we are."

Dortmund will be brimming with confidence ahead of Saturday's encounter following their 3-1 away win over Monchengladbach last week.

Additionally, Dortmund are still unbeaten at home this campaign, winning 11 of their 12 games and drawing the remaining match 2-2 versus Darmstadt. Their last defeat in front of their own supporters came at the hands of Bayern in April 2015.

The last time Dortmund went on a longer unbeaten run at home was between October 2011 and September 2012, a streak of 17 games.

Ingolstadt, meanwhile, will be hoping to spring a surprise on Saturday after recording a 1-0 win over Mainz in their first game of the second half of the season.

Their win saw them move to 10th place in the table with 23 points from 18 games, despite scoring only 12 goals all Bundesliga season, fewer than any other team.

However, they will have to make do without the services of Pascal Gross at the weekend due to suspension, who has created more chances this term than any other player in the Bundesliga (51).

The two sides have met just once competitively, with Dortmund recording a comfortable 4-0 win back in August 2015.

Ingolstadt were a force to be reckoned with away from home at the start of the season, winning their opening three away fixtures, but have since struggled to replicate that form and haven't won any of their last six league games on the road (drawing three and losing the remaining three), failing to find the net in four of these fixtures.

- Dortmund (41 points, 50 goals scored, 24 conceded) have the best record of any side sitting second in the Bundesliga table after 18 games.
- Four of Ingolstadt’s six victories this term have been by a 1-0 scoreline.
- Thomas Tuchel's side have the best attack in the league with 50 goals scored - none of which came from outside the box – and they have already scored three more goals than in the whole of last season.
- With only 12 goals scored, Ralph Hasenhuttl’s men have six fewer than Pierre-Emerick Aubameyang on his own (18).
- Dortmund are also the only side to score in all 18 games this campaign.