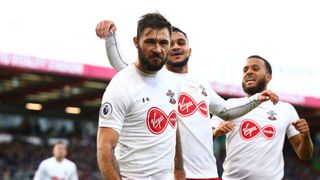 Charlie Austin's seventh goal in his last 10 Premier League starts rescued a point for Southampton, as they came from behind to draw 1-1 with Bournemouth.

Austin's return to the starting line-up has provided significant dividends for Mauricio Pellegrino, with Sunday's strike his third goal in as many games.

Southampton posed more of an early threat but Bournemouth were gifted the game's opening goal as Wesley Hoedt was caught in possession – Ryan Fraser the eventual benefactor as he swept home his first league goal since January.

It was not enough to secure a much-needed home win for Eddie Howe's side, though, as Southampton came roaring back after the break.

Austin was the man to eventually find a way through, his low strike beating the outstretched hand of Asmir Begovic to continue his fine form in front of goal.

Splitting the two south coast clubs proved impossible in the final 30 minutes, Austin twice going close, but the draw leaving both to settle for a point that sees them climb one place apiece in the table.

It was the visitors who made the early running as Bournemouth took their time to settle, Virgil van Dijk wasting their clearest opening with a poorly directed header from James Ward-Prowse's corner.

At the other end Fraser Forster initially had little to do but that all changed just before the midway point, the England goalkeeper needing to deny Jermain Defoe and Nathan Ake in quick succession.

Bournemouth felt they should have had a penalty after 31 minutes when Sofiane Boufal appeared to foul Smith, but Jonathan Moss thought differently, the referee booking the latter for simulation.

Begovic's first save of the encounter came soon after as Ward-Prowse delivered a floated cross for Austin, his bullet header punched away by the Bournemouth keeper.

That proved crucial as the hosts took the lead soon after. Hoedt dawdled in possession and was robbed by Joshua King, the forward rolled the loose ball to Andrew Surman and Fraser duly swept home.

Southampton's quest to get back into the match began with the introduction of Nathan Redmond at half-time, and he was involved in a slick move that ended with Begovic saving well to deny Boufal.

Redmond – presumably with the words of Pep Guardiola ringing in his ears – continued to pose a threat as Southampton began to dominate.

Crucial interceptions from Ake and Steve Cook initially kept the visitors at bay, but the marking was lacking just after the hour as Redmond found Austin, the striker lashing beyond Begovic.

He was denied a second by the offside flag and crossbar soon after, the 28-year-old turning Van Dijk's header onto the woodwork from close range.

Bournemouth were far from done, though, with King and Callum Wilson going close to restoring the hosts' advantage.

Austin missed the chance to be Southampton's match winner with nine minutes remaining as he headed Ryan Bertrand's cross over, leaving both sides to settle for a share of the spoils.